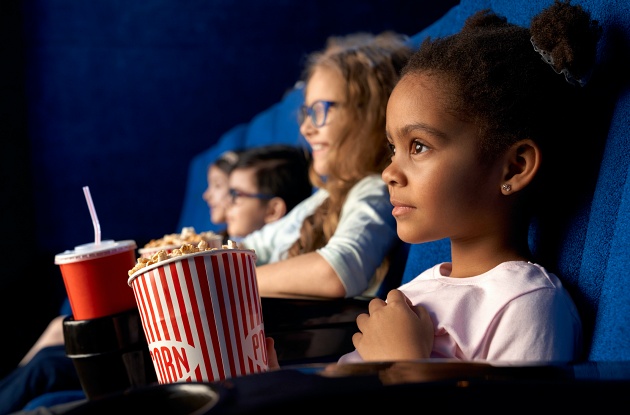 See a Family Movie at Regal Theaters for $2 This Summer

Relax in a nice, cool movie theater this summer and catch a family-friendly film for just $2!

Get kid-friendly activities sent to you!

Get the Best Family Activities

An eye-popping blend of classic animation and live action, Tom and Jerry's new big-screen adventure stakes new ground for the iconic characters and forces them to do the unthinkable... work together to save the day.

Ever since the dawn of time, the Minions have lived to serve the most despicable of masters. From the T-Rex to Napoleon, the easily distracted tribe has helped the biggest and the baddest of villains. Now, Kevin, Stuart, and Bob are on a global road trip, where they’ll earn a shot to work for the world’s first female supervillain and try to save all of Minionkind from annihilation.

Poppy and Branch discover that they are but one of six different Troll tribes scattered over six different lands devoted to six different kids of music, and their world is about to get a lot bigger and louder.

The Croods: A New Age

The prehistoric family the Croods are challenged by a rival family the Bettermans who claim to be better and more evolved.

In this sequel, the Templeton brothers have become adults and drifted away from each other but will reunite in unexpected ways.

From the creators of Shrek, Trolls stars Anna Kendrick as Poppy, the optimistic leader of the Trolls, and her polar opposite, Branch, played by Justin Timberlake.

How to Train Your Dragon: The Hidden World

What began as an unlikely friendship between an adolescent Viking and a fearsome Night Fury dragon has become an epic trilogy spanning their lives. In this chapter, Hiccup and Toothless will finally discover their true destinies: the village chief as ruler of Berk alongside Astrid, and the dragon as leader of his own kind.

The Secret Life of Pets

Taking place in a Manhattan apartment building, Max’s life as a favorite pet is turned upside down, when his owner brings home a sloppy mongrel named Duke. They have to put their quarrels behind when they find out that an adorable white bunny named Snowball is building an army of abandoned pets determined to take revenge on all happy-owned pets and their owners.

The first full-length animated Scooby-Doo adventure for the big screen is the never-before told stories of Scooby-Doo's origins and the greatest mystery in the career of Mystery Inc.

The Secret Life of Pets 2

Follows the summer 2016 film about the lives our pets lead after we leave for work or school each day.

Hop tells the comic tale of Fred, an out-of-work slacker who accidentally injures the Easter Bunny and must take him in as he recovers.

When the Whos declare they are going to make Christmas three times bigger this year, the Grinch realizes there is only one way for him to gain some peace and quiet: He must steal Christmas.

When a green ogre named Shrek discovers his swamp has been swamped with all sorts of fairytale creatures by the scheming Farquaad, he sets out with a very loud donkey by his side to persuade Farquaad to give Shrek his swamp back.

How local kids are giving back through volunteer work and community service.

Things to Do with Kids in Brooklyn this Weekend

Enjoy these fun weekend things to do with your kids in Brooklyn. Start planning your weekend now with our editorially curated list of the top things t...

Best Memes of the Week for Parents

Author: Barbara Russo is a freelance writer who holds a bachelor's degree in communications from the City University of New York. She enjoys playing guitar, following current events, and hanging out with her pet rabbits. See More

Camp W - Where Friendships are Made

Melville, NY Parents, one size fits all may be a great idea for socks, but when it comes to summer camp, it doesn't quite work. If you are looking for a camp where... Forest Hills, NY Established In 2006, Rose Academy Of Ballet Has A Place For All Who Appreciate A Fun Classical Approach To Dance Training And Dance Education. Lightbridge Academy is The Solution for Working Parents® providing the Gold Standard for health and safety in a nurturing environment for infant, todd...